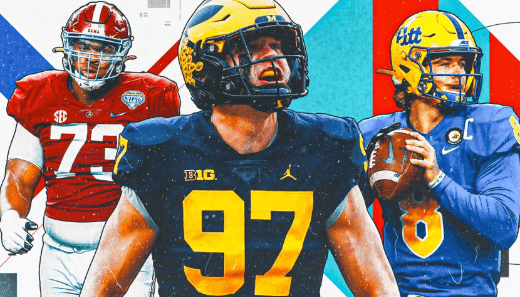 NFL mock draft At around the midpoint of football season, we are starting to get a clearer picture of how the NFL draft could unfold in April.  Obviously, there’s still things that will change between and draft day, however it’s good to get a look at where things stand now.

Sitting at 0-7, the Lions are a prime contender for the number one overall pick. The biggest question is whether they will take a quarterback or not?

On one hand, while they have Jared Goff, he’s had his struggles so they still have a need at quarterback.  However some of the blue chip non quarterbacks in this class may be too good to pass up and Kayvon Thibodeaux tops that list. That along with there not being a clear top quarterback to emerge in this class yet, leads me to believe that the Lions would go best player available in this class.

As a former highly-rated 5-star recruit, Kayvon Thibodeaux has looked like a top-five pick since his high school days and that’s been apparent since he set foot in Eugene and registered 10 sacks as a freshman.

He possesses eye-popping talent, right when you flip on the tape you can easily tell why he was such a highly sought-after recruit. The ceiling for him is sky-high as he has an elite blend of speed, quickness, power, and size.

This season he has shown everyone why he is the very best player in this draft class. Especially the past two games as he’s registered a total of 19 pressures and four sacks.

The trade down in last year’s draft is looking like an excellent move by the Eagles as with the Dolphins sitting at 1-6 it’s looking like it’ll be a valuable pick and right now it sits at 2nd overall in this 2022 NFL Mock Draft.

With Jalen Hurts having a good second season and this quarterback class being weaker than past ones it gives the Eagles an opportunity to invest their picks into building their roster.

Derek Stingley Jr. is easily one the best players in the draft, on top of that he plays corner, which is a position that is very valuable in today’s NFL.

He possesses all the physical tools you could possibly want in a corner as he’s got great size (6-foot-2), he’s very athletic, and he moves quite fluidly. What makes him truly special as a corner however are his rare ball skills, and as a freshman at LSU he picked off six passes and broke up a total of 15, which are numbers you almost never see, especially from a freshman playing in the SEC.

Stingley Jr. had a medical procedure on his foot last week and doesn’t have a timetable for his return. While unfortunate that he got injure obviously. The good news for him is that it won’t really affect his draft stock as he already prove himself as a high-level player.

Obviously, with the situation surrounding Deshaun Watson the Texans need to start looking to find a new franchise quarterback. With the exceptional season Malik Willis is having he’s looking like a good option to be the face of their rebuild.

Willis has a very good arm as he can make basically any throw on the football field.  In fact, according to PFF, 10.9% of his passes have been big time throws. Which is the best in college football by 2%.

Willis can also add an extra dimension as a runner as he is fast, elusive, and has good vision.  Through eight games this season he has recorded 51 missed tackles on 61 rush attempts, according to PFF.

The concern with Willis is that his competition level isn’t very high, however we’ve seen many quarterbacks from smaller schools go very high in the draft such as Carson Wentz and Trey Lance. So that shouldn’t stop NFL teams from drafting him.