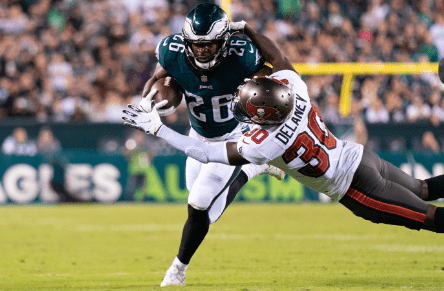 Philadelphia Eagles running back Miles Sanders will be out at least three games Eagles placing.

Eagles placing NFL Network Insider Ian Rapoport reported Friday that the Eagles are placing Sanders on injured reserve after the back suffered an ankle injury in Week 7, per a source informed of the situation.

The move knocks Sanders out a minimum of three games. However, Rapoport added that the RB should return soon after he’s eligible. The Eagles face the Lions, Chargers and Broncos the next three weeks.

Sanders suffered the ankle injury just 12 snaps into Sunday’s loss to the Las Vegas Raiders. He generated 30 yards on six carries and one catch for -3 yards in the limited time on the field.

Sanders’ usage has been the cause of much consternation in Philly this season, as coach Nick Sirianni has gone long stretches without getting the back touches. For the season, Sanders has generated 300 yards on 63 carries, averaging 4.8 yards per tote.

With Sanders out at least the next three games, rookie Kenneth Gainwell is in line for more touches. Veteran Boston Scott should also play a bigger role moving forward, splitting reps with Gainwell. Philly could also call up Jordan Howard off the practice squad.