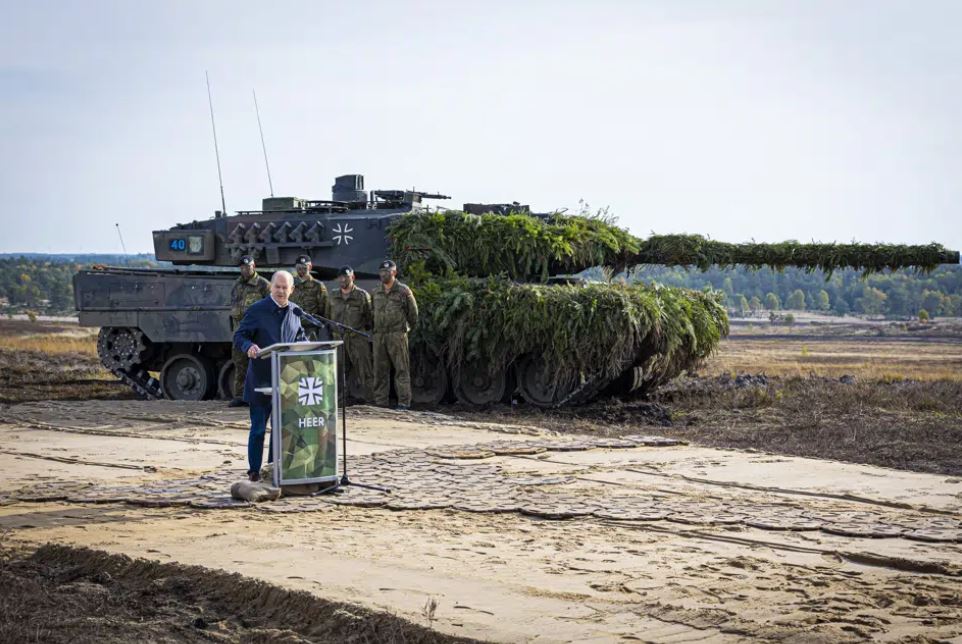 German has become one of Ukraine’s leading weapons suppliers in the 11 months since Russia’s invasion, but Chancellor Olaf Scholz also has gained a reputation for hesitating to take each new step — generating impatience among allies.

Berlin’s perceived foot-dragging, most recently on the Leopard 2 battle tanks that Kyiv has long sought, rooted at least partly in a post-World War II political culture of military caution, along with present-day worries about a possible escalation in the war.

On Friday, Germany inched closer to a decision to deliver the tanks, ordering a review of its Leopard stocks in preparation for a possible green light.

There was still no commitment, however. Defense Minister Boris Pistorius rejected the suggestion that Germany was standing in the way but said, “we have to balance all the pros and contras before we decide things like that, just like that.”

It’s a pattern that has been repeated over the months as Scholz first held off pledging new, heavier equipment, then eventually agreed to do so.

Most recently, Germany said in early January that it would send 40 Marder armored personnel carriers to Ukraine — doing so in a joint announcement with the U.S., which pledged 50 Bradley armored vehicles.

That decision followed months of calls for Berlin to send the Marder and stoked pressure for it to move up another step to the Leopard tank.

“There a discrepancy between the actual size of the commitment and weapons deliveries — it’s the second-largest European supplier — and the hesitancy with which it done,” said Thomas Kleine-Brockhoff, a Berlin-based senior analyst with the German Marshall Fund of the United States think tank.

Scholz, an unshakably self-confident politician with a stubborn streak and little taste for bowing to public calls for action, has stuck resolutely to his approach. He has said that Germany won’t go it alone on weapons decisions and pointed to the need to avoid NATO becoming a direct party to the war with Russia.

As pressure mounted last week, he declared that he wouldn’t rushed into important security decisions by “excited comments.” And he insisted that a majority in Germany supports his government’s “calm, well-considered and careful” decision-making.

Speaking at the World Economic Forum in Davos,

Switzerland, on Wednesday, Scholz listed some of the equipment Germany has sent to Ukraine, declaring that it marks “a profound turning point in German foreign and security policy.”

That is, at least to some extent, true. Germany refused to provide lethal weapons before the invasion started, reflecting a political culture rooted in part in the memory of Germany’s own history of aggression during the 20th century — including the Nazi invasion of the Soviet Union.

Scholz does face calls from Germany’s center-right opposition and some in his three-party governing coalition to more proactive on military aid; less so from his own center-left Social Democratic Party, which for decades steeped in the legacy of Cold War rapprochement pursued by predecessor Willy Brandt in the early 1970s.

Scholz “decided early on that he does not want to lead militarily on Ukraine assistance,” Kleine-Brockhoff said, though “he wants to be a good ally and part of the alliance and in the middle of the pack.”

and raises questions over whether they can count on the Germans, Kleine-Brockhoff acknowledged.

Berlin kept up its caution on the Leopard tank even after Britain announced last week that it would provide Ukraine its own Challenger 2 tanks.

The hesitancy isn’t just an issue between Berlin and Kyiv, since other countries would need Germany’s permission to send their own stocks of German-made Leopards to Ukraine. On Wednesday, Polish Prime Minister Mateusz Morawiecki said Warsaw would consider giving its tanks even without Berlin’s permission.

“Consent is of secondary importance here. We will either obtain it quickly, or we will do the right thing ourselves,” Morawiecki said.

British historian Timothy Garton Ash wrote in The Guardian and other newspapers this week that “to its credit, the German government’s position on military support for Ukraine has moved a very long way since the eve of the Russian invasion.”

But he argued that the tank issue has become

“a litmus test of Germany’s courage to resist (Russian President Vladimir) Putin’s nuclear blackmail, overcome its own domestic cocktail of fears and doubts, and defend a free and sovereign Ukraine,” and that Scholz should lead a “European Leopard plan.”

Whether that will eventually happen remains to seen. Scholz’s government has insisted on close coordination with the United States, a possible reflection in part of the fact that Germany — unlike Britain and France — relies on the U.S. nuclear deterrent.

On Friday, Scholz’s spokesman, Steffen Hebestreit, denied reports that Germany had insisted it would only deliver Leopard tanks if the U.S. sends its own Abrams tanks. He rejected the notion that Berlin is trailing others and insisted it is taking the right approach.

“These not easy decisions, and they need to well-weighed,” he said. “And this is about them being sustainable, that all can go along with them and stand behind them — and part of a leadership performance is keeping an alliance together.”

The U.S. has resisted providing M1 Abrams tanks to Ukraine, citing extensive and complex maintenance and logistical challenges with the high-tech vehicles. Washington believes it would be more productive to send German Leopards since many allies have them and Ukrainian troops would need less training than on the more difficult Abrams.