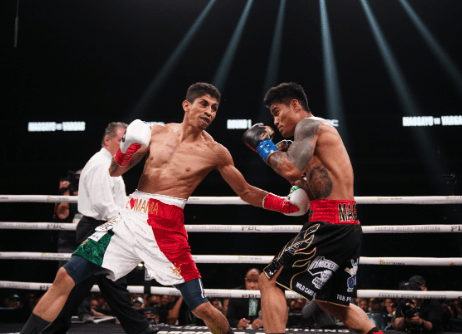 “Mexicans and Filipinos are two types of fighters who don’t take it lightly, we like war, very brave and that guarantees it will be a great fight. The ones who will win will be the fans,” Rey said at the press conference.

Rey spoke about his opponent, Magnificent Magsayo, whom he assured that he will surprise. Despite not having activity for more than a year, he assured that he continued working in the gym and will seek to “tear off the head” of the Asian.

“I’m not confident, but we’ve worked hard, I know what I’m capable of. Magsayo is going to come out throwing hard and with energy, but we are going to counter him. From there, we’re going to rip his head off,” mentioned the Otumba, State of Mexico, native to ESPN.

“It was surreal, he told me that the key to beating Vargas is to work on footwork and head movement. Stay humble, and pray. I believe in God and I believe in Manny Pacquiao,” stated the Magnificent.

What you need to know about the Magsayo vs. Rey Vargas fight

The profile of Rey Vargas

After four years of outstanding performances in the super bantamweight division, Rey Vargas from Mexico City, who boasts 35 wins in as many fights, 22 by knockout, will try to win the featherweight title against the powerful Magsayo, who in January, gave one of the highlights of the year by knocking out the American Gary Russell Jr.

Masgayo, on the other hand, has 24 wins in a row, 16 by knockout, and is confident going into the fight after dethroning Rusell and winning the WBC green and gold belt in the biggest victory of his career.

War of declarations prior to the Magsayo vs. Vargas clash

The featherweight champion explained that in his opinion. Vargas is a guy who runs away from the clash, so he expects him to fade on this occasion.

“Vargas always backs down in fights, there will be knockouts, otherwise he runs too much. To win I’ll have to use my footwork; the guy is tall and he’s going to run,” Magsayo commented at the press conference.

At 27 years old, the Filipino is going through his best moment and will be a stumbling block for the Mexican, who has been out of the ring for more than two years. Recovered from an injury. Last November he defeated his compatriot Leonardo Baez by unanimous decision. In a fight in which he showed good conditions at 126 pounds.

Rey Vargas, ready to give his all in the featherweight division

Vargas arrives ambitious to the featherweight category. In which he intends to win the World Council belt and then seek to unify titles in a category with several champions. The Mexicans Leo Santacruz, of the World Association. And Emanuel Navarrete, of the World Organization, and the British Josh Warrington, of the International Federation.

Trainers, a fundamental part of the Magsayo vs. Vargas fight

It should be noted that in both corners there are great trainers and long list of world champions in their careers.

Magsayo has Freddie Roach Rey Vargas has been Nacho Beristain. Trainers who have in common the epic rivalry between Pacquiao and Marquez.