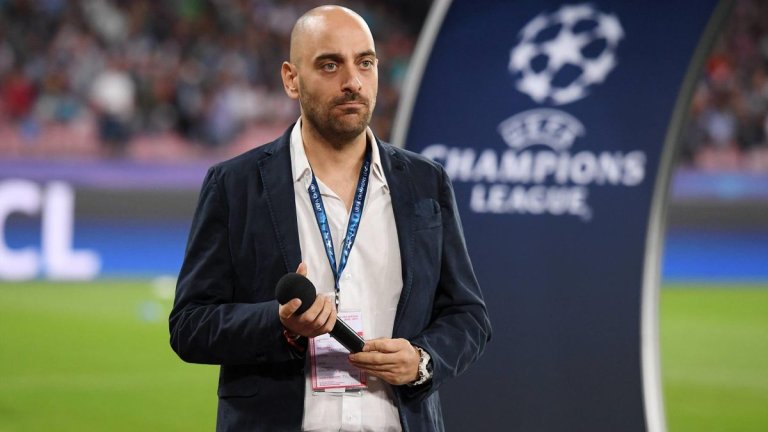 In Naples, everyone knows him. Almost as much as Napoli players. Daniele “Decibel” Bellini, a tall man with a Mediterranean complexion and an easy smile, has been ringing his voice throughout the city for more than a decade. “Precisely fourteen years,” he told us during our video call last Tuesday. Official speaker of his favorite club, which he supports “since small”, a love which he describes as “indescribable”, the man with 264,000 followers on Instagram became famous by chanting, in 2013, nine times the name of Gonzalo Higuain. Yes, nine times! The video quickly went viral on social media.

Since then, Bellini has shouted many others in “his” stadium, from those of Dries Mertens to Lorenzo Insigne, via Jorginho, a player he has remained very close to since his departure for Chelsea. His voice, always meticulously prepared before home matches, could well be used during the clash between Naples and Liverpool, this Wednesday (9 p.m.).

How did you become a Napoli speaker?

Daniele Bellini: In reality, it’s a small miracle. I didn’t think that could happen. I was lucky that it happened by being in the right place at the right time… Once, I had to replace a friend and a colleague. And since that day, I have never left.

Do you remember your first game?

D.B: Of course, there is even a video on Youtube. It was a Napoli-Juve, 3-1 victory. I remember it was an incredible moment at the very beginning of the season, and it was rather lucky for the rest.

Speaker and DJ, so it’s compatible?

What relationship do you have with the tifosi of Napoli?

D.B: I think I’m like their friend, because I too have been a Napoli tifoso since I was little. They know they can always ask me questions, take pictures, etc. They can ask me whatever they want. I am one of them. I love our relationship.And doing this job in a more modern stadium, is that something you might like?

D.B: Yes, it could be something good. Having the opportunity to take advantage of new technologies, being closer to the supporters… It could be very beautiful. To have such a warm audience close to the pitch would be exceptional.
You have just started your fourteenth season as Napoli announcer.

D.B: Many years, many players who come and go. There are no more historical frameworks, but it is good to know that the link remains even at a distance. And at the club, many employees are still there, all exceptional. It’s nice to work with people like that.

Exactly, do you keep in touch with some former players?

DB: Yes! I have to go to London to find Jorginho and Kalidou (Koulibaly). And then go to Istanbul to find Dries (Mertens), or even Toronto to see Lorenzo (Insigne). All of them are extraordinary and deserve the success they have. They achieved it with work, sacrifice and seriousness.

Who was the friendliest?

D.B: It’s hard to choose, but Jorginho is someone in gold. Always available, friendly, with a smile and ready to joke. It is with him that I am closest.

What name has been the funniest to shout all these years?

D.B: That of Cavani was something. We dreamed a lot with him. But there are so many more. Lavezzi, Mertens.

Is it true that you do this work for free?

D.B: When the club of your heart decides to call you, you are ready to do anything to join it. It’s the same for me. My passion for Napoli has been intact since I was little.

Do you have a method to prepare your voice before each match?

D.B: I am always very careful the day before the match. And I have several exercises to do to prepare myself. But in the end, it’s always the same: I completely let myself go and let everything flow out without control. It is the evening that guides me, the emotions.

What if you had to highlight a particular match?

D.B: There were many great evenings. Barca, Real Madrid, Liverpool. These teams always give a special flavor and the feeling of living a unique moment. It makes me happy to do it from the field, it’s wonderful.

Weariness has never invaded you?

DB: No. I dream of doing this until I’m 120 (laughs). Come on, let’s aim for a hundred years. I dream of dying in this stadium, now titled in the name of the great Diego Maradona. At least, like that, we will make my tombstone there.

Would you agree to work for another club?

D.B: In Italy, nobody. I could splurge just for Chelsea, where my friends are (he pauses) No, I couldn’t even. Napoli and nothing else.
Tell you the truth, the training was intense to correctly pronounce the name of Kvaratskhelia
D.B: I trained all summer! I even contacted Georgian friends to get the pronunciation right and give me a hand. They helped me a lot.

Do you have the same energy in everyday life?

D.B: I like to live life always to the fullest, so I try to always be on top to enjoy every moment.