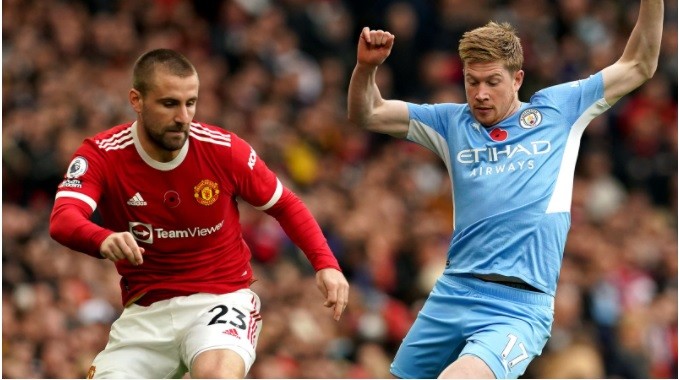 Gary Neville has conceded that Ole Gunnar Solskjaer is under “massive, massive pressure” following Manchester United’s 2-0 defeat to Manchester City but insisted the United boss is unlikely to be sacked mid-season.

United suffered their fourth defeat in six in the Premier League as they lost to their local rivals at Old Trafford, registering just a single shot on goal in a one-sided derby.

“I can’t look at myself and say this is the way I want Manchester United to play,”

After a relatively stabilising week – United beat Spurs 3-0 and grabbed a last-minute 2-2 draw with Atalanta – they were back in the doldrums with just four touches in City’s box.

“Ole is under massive, massive pressure but the first thing that has to happen is that he needs a team with courage,” said Neville.

“Up to the end of last season, the feeling here [at Old Trafford] was that there was progression because they finished second in the league. Everyone then thought that they got their recruitment right in the summer.

“So the club has not planned for this Man Utd to sink.

I know there are some United fans who think the club should have acted two weeks ago because Antonio Conte was available but this club was never going to appoint Conte and they are not prepared for this moment because they have the plan behind Ole.

“I don’t think there is any chance there will a decision [on the manager] during this season unless it gets so bad and it is getting to the point where it is so bad. They are 11 points off the top of the league if Chelsea win today [Chelsea drew, so United are 9 points behind] and this United squad should not be [so far] off the top. Nobody has expected this. Nobody would have expected United would sink so low at this point in the season.

“I think he has a few weeks to sort it out.”

And despite stemming the flow in the second half and keeping the score down, Keane feels Solskjaer may be under more pressure after this game than the 5-0 humiliation against Liverpool.

“I think Solskjaer will be under more pressure tonight than even the Liverpool game,” he said.

“When you are the manager, and he’s come into this game this morning, speaking about the players being in a good mood, but I’ve been a manager and if you are going to a match and you are looking over your shoulder on the bus and you see Luke Shaw, Harry Maguire and Fred, and your job depends on these guys, then you are in trouble.

“They are international players. Shaw, Maguire, Bailly, the midfield and Fred. Fred is playing for Manchester United. Anyone who tells me Fred is good enough for United is living in cuckoo land, and that is an important part of the football pitch.

Keane added: “Man Utd are in a bad place, but there is a way out of it Man Utd to sink.

“Is Ole the man to do it? Huge question mark. I hope he is but it is more hope than belief because every time there is a bad performance like that Ole gets the blame.

“Every time United produce a result, Ole’s the luckiest man on the planet. He’s got Ronaldo. Ole can’t seem to win but he has to look at himself in the mirror and he needs to do better here.

“Ole, you might be better off out of it Man Utd to sink.”

Speaking after the game, Solskjaer told Sky Sports this is not the way he wants his side to play.

“We need to get back to what we started to look like for a while, and we’ve got the players to do that,” he said.

“We’ve been in this situation a few times of course, since the last game we played here it has been a very difficult period. We need to be on the front foot more, I can’t look at myself and say this is the way I want Manchester United to play.”

Asked if he is starting to think he is on borrowed time Man Utd to sink:

“No, I don’t start to do that. I have good communications all the time with the club, we’re very upfront and honest about the situation.

“I’m sure when we come back, the players will be fresh in their mind after internationals. The demands on me and the players are going to be high, the expectations.”