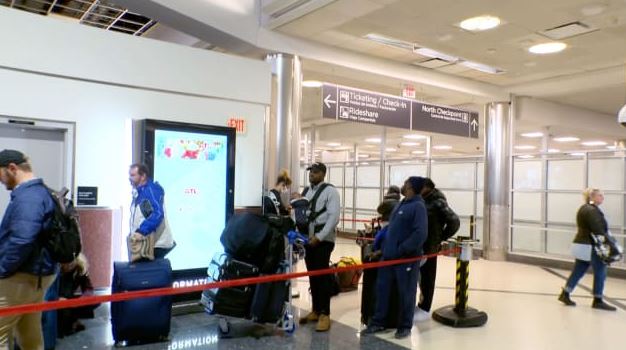 Last week’s winter weather travel mess is lingering like a hangover into this week Christmas — and the headaches are migraine-proportioned for Southwest Airlines and its frustrated passengers on Monday.
More than 3,600 flights within, into or out of the US had already been canceled by 4:10 p.m. ET Monday, according to flight tracking website FlightAware, while almost 5,800 flights had been delayed.
But Southwest accounts for a whopping share of those. None of the other US carriers have canceled nearly as many flights or as much of their schedule as Southwest.
The Dallas-based airline had canceled roughly two-thirds of its flights — about 2,700 total — as of 4:10 p.m. Monday, according to FlightAware. At one point, it canceled around 300 flights in the span of a half hour Monday afternoon.
On social media, customers are complaining loudly about long lines to speak with representatives, problems with lost bags and excessive wait times or busy signals on the airline’s customer service telephone lines.

Carlos Suarez spoke with frustrated passengers in line at the Southwest ticket counter at Hartsfield-Jackson Atlanta International Airport on Monday.
He’s reportedthat about 150 customers were waiting in a long line at one point to rebook, with the line snaking around the back of the ticket counter.
‘Disruptions across our network’
Southwest responded to the massive cancellations in an emailed statement Monday afternoon:
“With consecutive days of extreme winter weather across our network behind us, continuing challenges are impacting our Customers and Employees in a significant way that is unacceptable,” the statement read.

Over 1,700 US flights canceled the day after Christmas

“We’re working with Safety at the forefront to urgently address wide-scale disruption by rebalancing the airline and repositioning Crews and our fleet ultimately to best serve all who plan to travel with us.
“On the other side of this, we’ll work to make things right for those we’ve let down, including our Employees.”
In an earlier statement to CNN on Monday, Southwest Airlines said it is “experiencing disruptions across our network as a result of (the winter storm’s) lingering effects on the totality of our operation.”
Some of the airports seeing the biggest issue are Christmas Denver, Las Vegas, Chicago Midway, Baltimore/Washington, and Dallas Love Field where Southwest operates.

Calls to Southwest’s customer service attempted Monday afternoon by CNN did not go through, so customers couldn’t even get in the queue to speak to a representative. Southwest told CNN it “fully staffed to answer calls.”
The airline also says, “those whose flights have been cancele may request a full refund or receive a flight credit, which does not expire.”
A tweet from Southwest directing customers to self-service options had more than 870 replies — many of them angry — around 4:30 p.m. ET

One of the replies in part read: “Stop blaming the WEATHER! Had to buy a first class ticket on another airline but it TOOK OFF ON TIME! You still have our luggage with medication inside! Can’t get through on the phone!”
Meanwhile, in hard-hit western New York, Buffalo International Airport said in its most recent tweet that it plans to resume passenger flights at 11 a.m. ET Tuesday.
The temperature at the airport was 19 degrees Fahrenheit (minus 7 Celsius) around 4 p.m. ET, with light snow falling on top of the huge amounts the area has already seen.