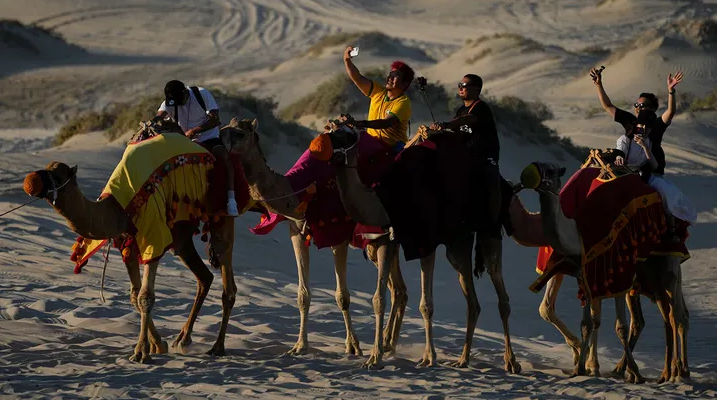 Qatar’s camels have begun to take the brunt of the country’s jump in tourism amid the World Cup frenzy.

Qatar has received more than 1 million tourists so far for the month-long sports event, with both Qatar and neighboring countries betting on the tourism boost. Local activities, including camel rides, have seen a jump in demand since the World Cup kicked off on Nov. 20.

Camel handlers are jumping in on the opportunity to boost business, with one particular company telling the Associated Press they have seen a rise in the number of daily camel rides, from their usual 20 on the weekdays and 50 on the weekends to 500 in the morning and another 500 in the evening during the World Cup.

“There’s a lot of money coming in World Cup,

Al Ali told the AP his company went from having 15 camels to a total of 60. He noted that the increase in demand for camel rides has taken a physical toll on the camels as well, with less time to rest in between rides.

Yet while business is brisk, animal rights activists aren’t happy with what they see as an exploitation of the “ships of the desert.”

Al Ali said a camel generally rests every five rides, with a short ride lasting around 10 minutes and longer ones ranging between 20 and 30 minutes. Now with the increase in tourists in line for a camel ride, the animals are now taking on 15 to 20 rides without a break, with some even maxing out at 40 rides.

… because they have other plans they need to go to in the middle of the desert,” Al Ali said.

“PETA reminds visitors to the World Cup and World Cup that there no retirement home for these animals, who sent to slaughter when they too broken to useful, so the best way to help them is to refuse to get taken for a ride,” Cryar told Fox News Digital.

Qatar’s tourism industry has seen a boom since being awarded the World Cup by FIFA and the region will continue to see a large influx of tourists with upcoming sports events, including four F1 races in 2023. Experts argue the region’s increased spending on sporting events is a way to improve its image and reputation on the global stage.