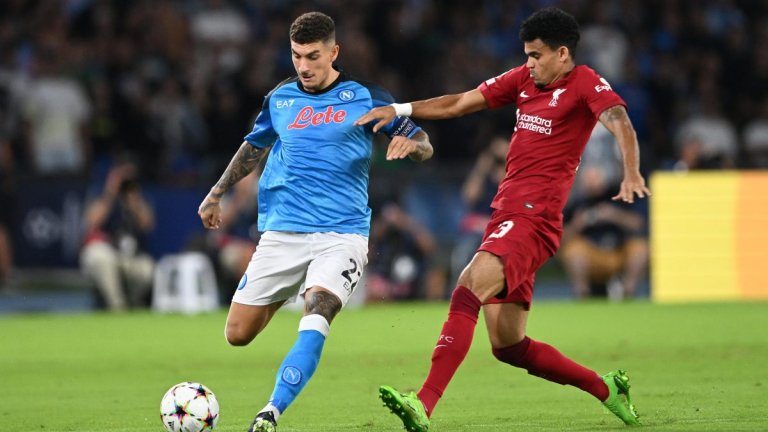 UEFA Champions League Napoli-Liverpool 4-1 Live result. Azzurri in the lead at 5 ‘with a goal from Zielinski on a penalty, Anguissa’s doubling. First goal in blue from Simeone that marks the third goal, the first of his Neapolitan adventure. Error from the disk for Osimhen. Double from Zielinski who scores the blue poker at the beginning of the second half. Match highlights and goal videos.

Luis Diaz is by far the most dangerous man in Liverpool. The Colombian makes the right move and hits his head on a splendid cross from Alexander-Arnold, Meret flies and sends for a corner.

Lozano takes the place of Politano. The two right wingers of Napoli always alternate. Kvaratskhelia also comes out, one of the best in the field ever, who has been replace by the young Zerbin, who also makes his debut in the Champions League.

Liverpool are now pushing, looking for a sensational comeback

Liverpool believe in it and even if they are 4-1 down they think about the comeback. Klopp’s boys are hunting for a goal that would halve the disadvantage.

Liverpool removes at least zero from the goal box and shortens the distance with Luis Diaz who makes a splendid play and with a shot from the edge puts the ball in the corner, 4-1. The Colombian tries to wake up his team.

Poker of Napoli, Zielinski scored again, 4-0 to Liverpool. Another lethal restart by the Neapolitans and another goal by the Azzurri, a brace for Zielinski.

Teams in the field, the recovery begins

Teams in the field, the recovery begins Napoli and Liverpool return to the pitch. Among the Reds is Matip for Joe Gomez, by far the worst in the field.

End of the first half, stellar Napoli

Who would have thought that? 3-0 at the interval. Fabulous Napoli against a Liverpool that could return to the locker room with a worse passive. Zielinski on a penalty, Anguissa and Simeone the scorers. And Osimhen, who got injured, missed a penalty kick. The game certainly cannot be considered closed, Liverpool, beyond the horrendous 45 ′, is a very high level team and has many resources.

Mamma Mia. That Napoli also scored Simeone, 3-0. Anguissa recovers a ball in the middle of the field, in speed Napoli is lethal, Kvaratshelia makes an amazing play, drinks an opponent and puts in the middle where Simeone is stationed who from two steps and with the door wide open can not make mistakes.

Injury to Osimhen, the bomber gives way to Simeone

He asks for the change Osimhen who feels pain after a shot, sits on the pitch, waits for the Napoli doctors who formalize the need for the change. Among the applause the bomber leaves the field, instead of him Raspadori does not enter but Simeone.