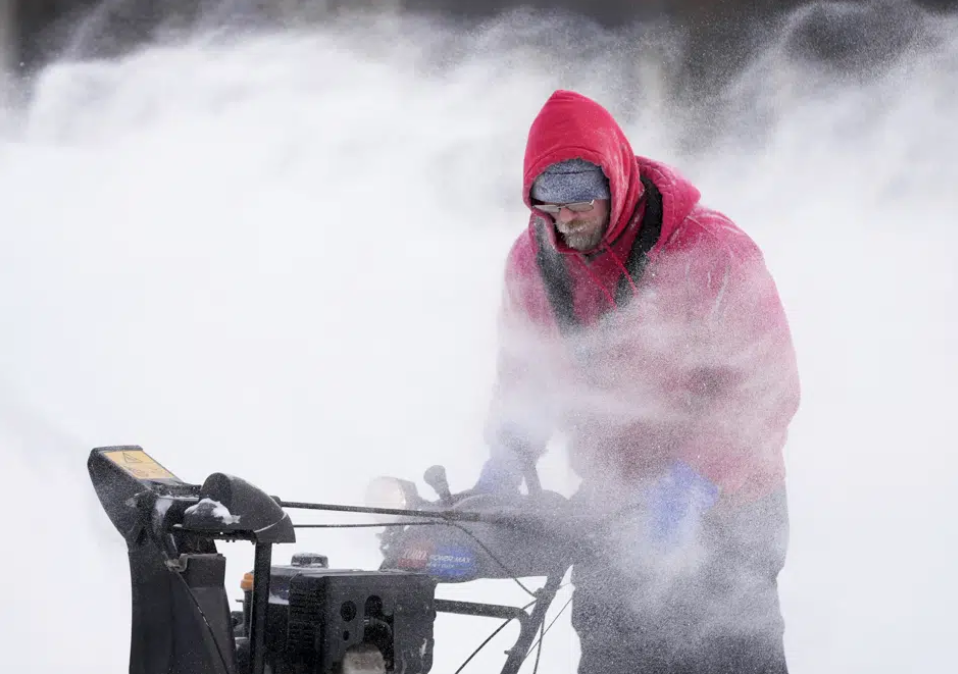 Tens of millions of Americans endured bone-chilling temperatures, canceled holiday gatherings Friday from a winter storm that forecasters said was nearly unprecedented in its scope, exposing about 60% of the U.S. population to some sort of winter weather advisory or warning.

More than 200 million people were under an advisory or warning on Friday, the National Weather Service said. The weather service’s map “depicts one of the greatest extents of winter weather warnings and advisories ever,” forecasters said.

Power outages have left about 1.4 million homes and businesses in the dark, according to the website PowerOutage, which tracks utility reports. The Tennessee Valley Authority, the nation’s largest public utility, ended its rolling blackouts Friday afternoon but continued to urge homes and businesses to conserve power. In Georgia, hundreds of people in Atlanta and northern parts of the state were without power and facing the possibility of sub-zero wind chills without heat.

And nearly 5,000 flights within, into or out of the U.S. canceled Friday, according to the tracking site FlightAware, causing more mayhem as travelers try to make it home for the holidays.

“We’ve just got to stay positive,” said Wendell Davis, who plays basketball with a team in France and was waiting at O’Hare in Chicago on Friday after a series of flight cancellations.

The huge storm stretched from border to border. In Canada, WestJet canceled all flights Friday at Toronto Pearson International Airport, beginning at 9 a.m. as meteorologists in the country warned of a potential once-in-a-decade weather event.

And in Mexico, migrants waited near the U.S. border in unusually cold temperatures as they awaited a U.S. Supreme Court decision on whether and when to lift pandemic-era restrictions that prevent many from seeking asylum.

Winter storm sweeps US ahead of holidays

Forecasters said a bomb cyclone — when atmospheric pressure drops very quickly in a strong storm — had developed near the Great Lakes, stirring up blizzard conditions, including heavy winds and snow.

Multiple highways  closed and crashes claimed at least six lives, officials said. At least two people died in a massive pileup involving some 50 vehicles on the Ohio Turnpike. A Kansas City, Missouri, driver killed Thursday after skidding into a creek, and three others died Wednesday in separate crashes on icy northern Kansas roads.

Michigan also faced a deluge of crashes, including one involving nine semitrailers.

Brent Whitehead said it took him 7.5 hours __ instead of the usual six __ to drive from his home near Minneapolis to his parents’ home outside Chicago on Thursday in sometimes icy conditions.

“Thank goodness I had my car equipped with snow tires,” he said.

Activists also were rushing to get homeless people out of the Winter storm. Nearly 170 adults and children keeping warm early Friday in Detroit at a shelter and a warming center that designed to hold 100 people.

“This is a lot of extra people” but it wasn’t an option to turn anyone away, said Faith Fowler, the executive director of Cass Community Social Services, which runs both facilities.

In Chicago, Andy Robledo planned to spend the day organizing efforts to check on people without housing through his nonprofit, Feeding People Through Plants. Robledo and volunteers build tents modeled on ice-fishing tents, including a plywood subfloor.

“It’s not a house, it’s not an apartment, it’s not a hotel room. But it’s a huge step up from what they had before,” Robledo said.