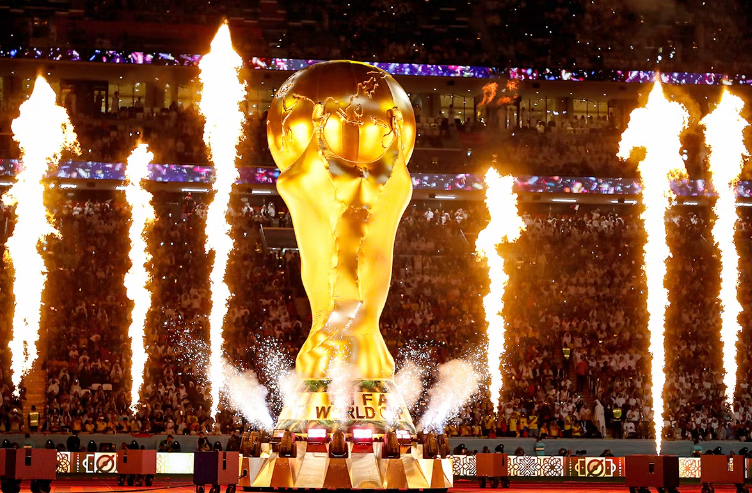 When the Qatari government decided to spend millions of pounds on a World Cup opening ceremony featuring Morgan Freeman, Jungkook from BTS and hundreds of performers, it probably hoped it would be the moment when the global media finally focused on football rather than human rights.

What it probably did not expect was that the BBC would ignore the entire event in favour of a broadcast criticising the treatment of migrant workers, highlighting corruption at Fifa and discussing the ban on homosexuality in Qatar. And that was just in the opening two minutes.

“It’s the most controversial World Cup opening ceremony  in history and a ball hasn’t even been kicked,” said the Match of the Day host Gary Lineker as he welcomed viewers to the start of the national broadcaster’s coverage on BBC One.

Ever since Fifa chose Qatar back in 2010

the smallest nation to have hosted football’s greatest competition has faced some big questions – from accusations of corruption in the bidding process to the treatment of migrant workers who built the stadiums where many lost their lives. Homosexuality is illegal here. Women’s rights and freedom of expression are in the spotlight. Also, the decision six years ago to switch the World Cup from summer to winter.”

He concluded: “Against that backdrop, there’s a tournament to be played – one that will be watched and enjoyed around the world. Stick to football, say Fifa. Well, we will – for a couple of minutes at least.”

What followed was an evisceration of the political skulduggery and corruption that led to the world’s best footballers gathering in Doha in the middle of the European winter.

The BBC declined to explain why it had shunted coverage of the opening ceremony – traditionally an opportunity for host countries to project soft power around the world – to an online-only stream. Viewers in other countries saw Jung Kook, one of the most famous singers in the world, perform his new song – sample inspirational lyric: “Look who we are, we are the dreamers / We’ll make it happen because we believe it” – in a packed stadium. At the same moment, BBC One viewers were watching the presenter Ros Atkins introduce an interview with Amnesty International and state: “We’ve never seen a World Cup with a carbon footprint like this before.”

Even the former footballers brought in to analyse

The actual sport for the BBC broke down any pretence that politics should be kept out of football. The former England international Alex Scott mocked Fifa’s chief, Gianni Infantino, for suggesting he could feel solidarity with migrant workers and the expense of attending the World Cup. “You will never know what it is like to be a migrant worker. To keep saying football is for everyone – it’s not. You can’t say football for everyone,” Scott said.

The former England captain Alan Shearer went further. “If he feels that strong about the migrant workers and their families, Amnesty has been asking Fifa for just over $400m in a compensation fund. They haven’t agreed to that. Why?” Shearer asked.

Rather than Doha’s preferred narrative of a tiny Arab country uniting the opening ceremony with football, viewers in the UK were left in no doubt that the World Cup mired in accusations of bribery and that Qatar a deeply flawed host country.

There was, of course, an alternative to the BBC’s coverage. Viewers watching in the UK on Freeview could have watched the buildup on Al Jazeera, the English-language rolling news channel funded by the Qatari government. There there acknowledgement of the criticisms but the event presented in the context of “incredible advances in infrastructure” in Doha.

While the BBC highlighted again and again

The deaths of migrant workers, Al Jazeera showed construction staff meeting the England team, as a voiceover intoned: “Had it not been for the beautiful game, these two groups of men, with their different languages and backgrounds, might never have met. But football has brought them together.”

Back on the BBC, there was no such niceties, although Lineker did push Shearer to address the parallels with his boyhood club Newcastle United riding high thanks to enormous Saudi Arabian investment.

And then, after half an hour, the programme rapidly shifted towards discussion of football – the tactics, the egos, the lineups, the optimism, the potential winners, the likely losers, the adverts for alcohol sponsors who cannot sell alcohol, the likelihood of Qatar or Ecuador, playing the opening match, making it out of the group stage – and, eventually, 22 people kicking a ball around a pitch.

But BBC viewers had just seen something unusual: a television broadcaster with the rights to show the world’s biggest sporting event choosing to comprehensively trash the product it was about to serve up.