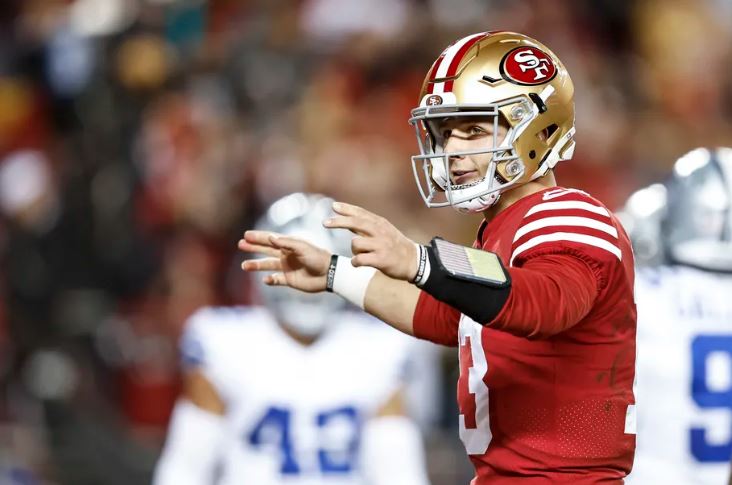 7 reasons the 49ers should be scared of the Eagles .It’s the Eagles and the 49ers for a trip to the Super Bowl.

This Sunday at 3pm ET at Lincoln Financial Field, the top two seeds in the NFC will battle it out in a game featuring two very evenly matched teams, and it’s going to be a very looooooooong week of waiting here in Philadelphia.

It should be a slobberknocker of a game, one in which the Eagles are 2.5-point favorites as of now, according to DraftKings.

Normally, the home team gets a three-point bump, indicating the betting public believes San Francisco is about a half-point better on a neutral field. Given their 12-game winning streak, it’s understandable, although the Eagles’ 14-3 regular season record and 15-1 record with Jalen Hurts at quarterback are hard to bet against, especially after their 38-7 slaughter of the Giants on Saturday.

7 reasons the 49ers should be scared of the Eagles

They have only met once in the playoffs, an entirely forgettable 14-0 wild card defeat following the 1996 season, the last desperate gasp of the Ray Rhodes era. Ty Detmer threw two INTs at the goalline on a muddy, foggy, miserable day in San Francisco. It’s best we just forget that game ever existed, but if you want a refresher and enjoy torture, here you go.

There will be time this week to break down the film and look at the X’s and O’s of this match-up, but before we do all that, let’s make one thing perfectly clear.

The Eagles should not fear the 49ers. In fact, there are more reasons for the 49ers to fear the Eagles than vice versa.

Coming into the divisional round, fans had their doubts about the Eagles, specifically the health of Jalen Hurts and Lane Johnson. Johnson’s ability to play through a torn muscle in his core area was nothing short of miraculous, and Hurts proved he is more than healthy enough to lead a fully ready Birds offense. And a huge shoutout to Jonathan Gannon for a brilliantly executed and planned defensive scheme against a Giants team that had come into the Linc pretty hot.

Brock Purdy at the Linc

Has he won two playoff games, making some big throws along the way in their victories over the Seahawks and Cowboys?

Has he had to face anything like what he’s going to see at Lincoln Financial Field on Sunday afternoon?

Purdy has played just two road games since taking over for Jimmy Garoppolo in Week 14, against the Raiders and Seahawks, beating Seattle 21-13 and Las Vegas 37-34. He has played five games in San Francisco, including in the wild card and divisional round the last two weeks, in front of a raucous home crowd. In fact, Purdy has never started a game that wasn’t played on the west coast, and he certainly has not played in a postseason environment on the road before.

Any QB will tell you a road playoff game is a different animal, and it’s extremely unusual for a young quarterback to do what Joe Burrow has done the last two years. Can Purdy do it? He sure has enough talent around him, but it’s a fair question.

Dallas’ defense played very well on Sunday, holding him to an 87.4 passer rating on 19-for-29 passing and 214 yards with no touchdowns or interceptions. However, the Cowboys dropped about three potential interceptions, and only sacked him twice.

The Eagles defensive line has 75 sacks this year, including five on Saturday night against Daniel Jones. No other defensive unit is within 15 sacks of them, and Purdy has certainly not seen a pass rush as relentless as what the Birds are likely to show him this week. Purdy has looked skittish and jittery when he does face pressure, which should play right into Jonathan Gannon’s hands.

The 49ers have a very good offensive line, but they are weaker in the middle of the line than the edges, which should allow a fresh Javon Hargrave, Fletcher Cox, and Milton Williams to eat while the edge rushers do their work on the outside. How will Purdy hold up?

Again, it’s a Purdy-centric reason, but when you have two rosters as even as these two teams are, it often comes down to the quarterback.

In that regard, Jalen Hurts is a monstrous advantage, even though he’s not a whole lot older than Purdy.

The coolness and calmness with which Hurts played on Saturday night made everything appear effortless. With the entire playbook open and Hurts appearing ready and willing to run with the football, the offense once again looks inevitable, rolling up 26 first downs against New York and Jalen making the right decision with the ball virtually every snap.

Purdy has played well, but nowhere near Hurtsian levels.

Shanahan is a great playcaller.

Shanahan is not good with game management.

The two plays above aside, just before halftime, the Niners had the ball with just under two minutes left, and with the score tied 6-6, Shanahan allowed 25 seconds to run off the clock before running a play in his own territory, scared to give the ball back to Dallas before the half. Instead of recognizing he has one of the most talented offenses in the NFL, Shanahan preferred to play it safe, leaving him time only for a field goal after moving the ball down the field heading into the locker room. He explained his rationale after the game.

hat strategy makes sense if you’re the Commanders or the Giants, but not if you’re the Niners. This is not a new phenomenon with Shanahan, by the way, and you can bet, with a healthy Hurts at the controls, Nick Sirianni won’t do the same thing.

It was apparent on Saturday night that the Eagles benefitted from their opening round bye. They were fresh, athletic, and fully ready for the Giants. This week, they’ll play just their second playoff game while San Francisco, as the No. 2 seed with no bye, will be on their third in three weeks.

Not only that, with the Eagles having played on Saturday, they will have one extra day of rest heading into the NFC Championship Game. While one day may not seem like a lot, in the life of an NFL player/coach, it is a big deal.

That’s not enough to sway the game one way or the other likely, but one has to think San Francisco, in a tight divisional match-up that came down to the wire and one less day to rest and a cross-country flight ahead of them, will come into Sunday more fatigued than a Philly team that was able to stay home, get an extra rest day and remove their offensive starters for the final drive after the week off.

In looking at the opponents Purdy has beaten, one can’t help but notice the lack of juggernauts on the schedule.

The 8-9 Tampa Bay Bucs at home
At the No. 7 playoff seeded Seahawks in Seattle
At home vs. the Commanders
In Las Vegas against the Raiders
Home vs. the Cardinals in Week 18
Certainly, no one is going to take anything away from a playoff win against the Seahawks. Were one to do that, one would have to hit the Eagles for their easy victory against New York. And beating Dallas, even at home, is a legit win. While Purdy wasn’t the reason they won, they did win it with him at QB. Can’t throw shade on that, the Cowboys are good.

All that being said, the 49ers have had a similar schedule to the Eagles during Purdy’s winning streak, and didn’t have to play in a division in which no team finished with a losing record. The Eagles went 14-3 in the East, where the Cowboys were the 3rd-best team in the conference, the Giants won 9 games and even Washington managed to win 8.

In the NFC West, the Niners won 13, the Seahawks 9, while the Rams won just 5 and the Cardinals 4. The NFC East was a tougher division than the NFC West all season, so pump the brakes a bit on the domination of the 49ers in the regular season.

When San Francisco’s defense took on Justin Fields in Week 1, the Chicago coaching staff hadn’t yet allowed him to be the dominant force on the ground he was by the time the Eagles met him in Week 15. They did not face Lamar Jackson, nor Josh Allen, nor Daniel Jones, the top five rushing QBs in the league.

In Jalen Hurts, this will be their first time going up against a quarterback who poses as much of a threat to run as a running back, and it will be interesting to see how the 49ers react. Of all the defenses in the NFL, San Francisco is best equipped to keeping Hurts’ running game under control, but 760 yards rushing and 13 TDs make him a weapon inside the red zone they haven’t seen before.

The Eagles don’t kick field goals. They score touchdowns, mainly because of the threat of Hurts to run inside the 20. It poses a headache the Niners haven’t had to digest as of yet.

So, there’s my list. You could also add in the fact the Eagles have perhaps the best offensive line San Francisco’s defense will see this year, or the two Pro Bowl cornerbacks on the outside, but we can cover all that in the match-up breakdowns as the week goes on.

Could you come up with a list of 7 reasons why the Eagles should be more afraid of the 49ers? Sure, but why would you?