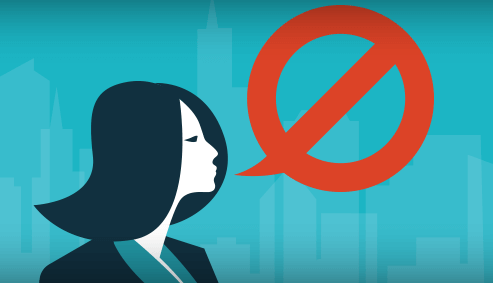 Woman in Business and leadership often find it difficult to say “no” to all types of requests. If this is you, it mean getting overload and having to put your dreams and desires on the back burner while you take care of everyone else’s goals. You can learn to say “no” without being offensive. A positive result will be that you grow in your self-confidence and self-esteem get more done towards your own goals. Here are 7 situations you might encounter on a regular basis with ways to just say “no” that will also help you to maintain respect Woman in Business.

Are you already feeling strapped financially when someone you care about begs to borrow some money? We’ve all been there. The request could range from needing a sandwich to wanting to pay a bill. People might think you have the money to spare to take care of both you and their problems because of your position. To help with this, establish a policy to never lend money to friends and family and stick with this resolve. It might sound harsh at first but decide which you’d rather keep – the money or the relationship. You’ll only have to say it once maybe twice and the word about this policy will get around.

2. Chipping in for Gifts.

Do you get asked to contribute money or kind words to people in the workplace that you have a conflict with or maybe are dealing with from a leadership perspective? Would your contribution cause a problem that only you and the other person might understand? It is common to have a card passed around and everyone asked to put in a dollar or two for a birthday, wedding or baby announcement.

While this is a nice idea, it might not be appropriate for you to participate. You can decline by either letting the donation envelop move onto the next person or just say “No thank you. I’ll just say a word to Tim when I see him.” You don’t have to go into any further explanation about your motives and the less said the better.

3. Someone Wants to Come to Private Party.

It’s very difficult to give events on some occasions and especially when you have to limit the guest list. Sometime, people want an invitation because of the career building possibilities they see at an event. You don’t have to give in to bullying about letting someone come to a private event. Politely inform the person that guest list establish, there are only so many places at the table and you appreciate their interest. If you want to maintain the relationship suggest that you’d enjoy getting together on another occasion to talk. Most people understand and if not, you’ve done what you can to politely move on in the situation.

4. Turning Down a Promotion Woman in Business.

Can you imagine turning down a job promotion? You might find yourself in this situation if the promotion means accepting a position that you really don’t want for personal or professional reasons. If the promotion means accepting a position that doesn’t fit your goals and life style, you might be ready to turn it down. It’s better to be honest about what you want in the workplace than to take on a job or situation that just doesn’t work for you. Address the issues from a specific point of view.

Mention that you flatter to be offered this position but due to circumstances in your life at this time you are not able to accept the position. You can explain that you don’t feel you the position is in line with your career goals or that your situation wouldn’t allow you to meet the expected obligations or the job. If you want, ask to consider again in the future.

5. Being Expected to Lead Woman in Business.

Does it seem like you’re the first, and often the only person who gets called on to head things up with your organizations, work, and community or even work events? It seems that no one else wants to volunteer to take on the lead positions. The excuse given that “You do things so well.” It also leaves you with a totally impact schedule that means putting everything else you’ve wanted to do aside.

You even see others going to their family events while you’re getting extra events done. Learn to just say “thanks for thinking of me once again but I think it would be good to let someone else have the opportunity to take the lead this time.” If people try to throw a guild trip on you that the project just won’t get done without you. Consider if it’s really that important of a project if no one else wants to head it up? You can always take on a minor role in order to keep involved if you want or just participate in the final event.

6. Overburden with Tasks Woman in Business.

Come to some clear conclusions that work for you so you can continue to do a good job. After the meeting, send a follow-up thank you note to the boss or colleagues reiterating what the conclusions were. This is important. If a deadline miss because you reassign you want to be able to show that it wasn’t your fault if you were not on that task after all.

Some workplaces get into the habit of giving recognition in particular ways to people. This might have gone on for years but now the worker force has diversified. You have people from new cultures, generations and belief systems. Giving recognition in the same manner is not acceptable or appreciated by everyone. This could mean changing some of policies and offering new ideas for recognition. Now everyone wants to point out individually for what they’ve done. Instead of a public announcement,

suggest giving a letter of appreciation, private note or gift certificate or some other type of quiet recognition. Ask the person what she would prefer to be sure. For instance, instead of a party to celebrate an upcoming event or success. A few hours off or a cash bonus might be more appropriated. Determine new ways to recognize employees before the occasion arises to avoid embarrassing cultural mistakes that intend for good.

Remember, when you learn to say “no” to one thing it means you are saying “yes” to another. Consider what’s important in your life and what takes priority.

Learning to say “no” without being offensive is a leadership quality. That all women in leadership can learn to do so with grace.